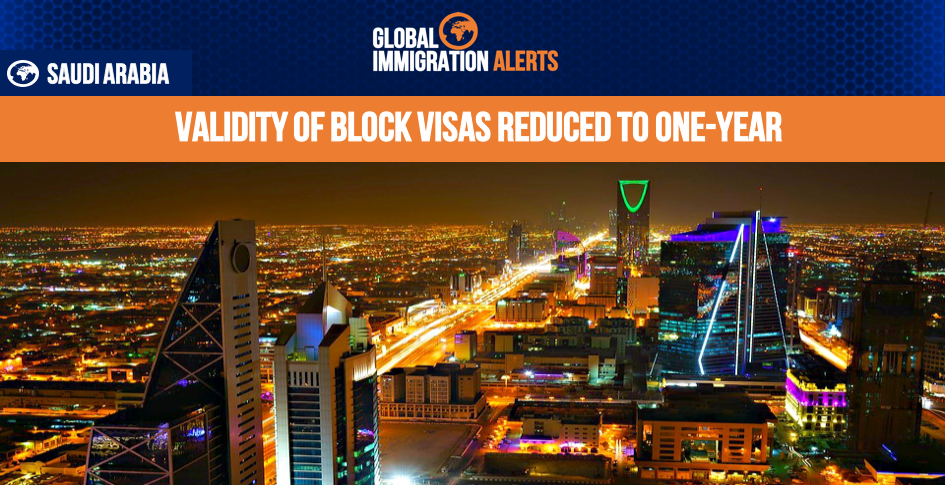 Effective immediately, companies in Saudi Arabia will have to utilize their block visas more quickly in order to hire foreign employees. The Saudi Ministry of Labor has announced that it is reducing the validity period of its block visas from two years to one year. Thus, companies now have just one year to recruit and hire the needed foreign workers before their block visa automatically expires.

Only block visas for foreign domestic workers and those employed by Saudi government agencies are exempt from the new shorter validity period.

Block visas are the primary basis by which companies bring foreign workers to the Kingdom. Under the scheme, employers receive a pre-approved “block” of visas to hire foreign workers. With these recent changes, employers will now have just one-year for each block visa in which to recruit and hire workers and then apply for work visas at the Saudi overseas consular posts in the workers’ home country.

Companies relying on foreign labor may want to reexamine their recruitment and hiring processes to ensure that they are ready to proceed with the immigration procedures for their prospective foreign workers immediately upon receipt of the company’s block visas.

The move to shorten the validity period of block visas is reportedly part of the ongoing efforts to encourage the hiring of Saudi citizens and reduce local unemployment. The move comes ahead of a scheduled increase in work permit fees slated for 2018. Whether the change in validity period will affect any new block visa fee remains undetermined.